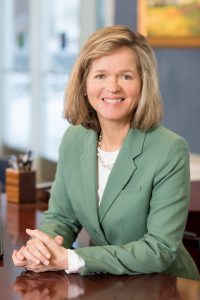 Mrs. Weigel joined Norway Savings Bank in 2001 and has worked in the banking industry for 31 years. She is active in the community and serves on the boards of Norway Savings Bank and the Outdoor Sports Institute. Pat also serves as board chair of Western Maine Health and is a member of the Professional Development Council of the American Bankers Association (ABA). She received a B.S. in Psychology from Denison University.

Tony McKim, President & CEO of First National Bank, was elected Vice Chair of the Association. Mr. McKim began his banking career twenty-six years ago as an Internal Auditor and held various positions until eventually becoming President.  He is involved in many community organizations and founded Acadian Youth Sports, to bring children from grades 3 through 8 together to learn to play sports.  He currently a member of American Bankers Association Government Relations Council.